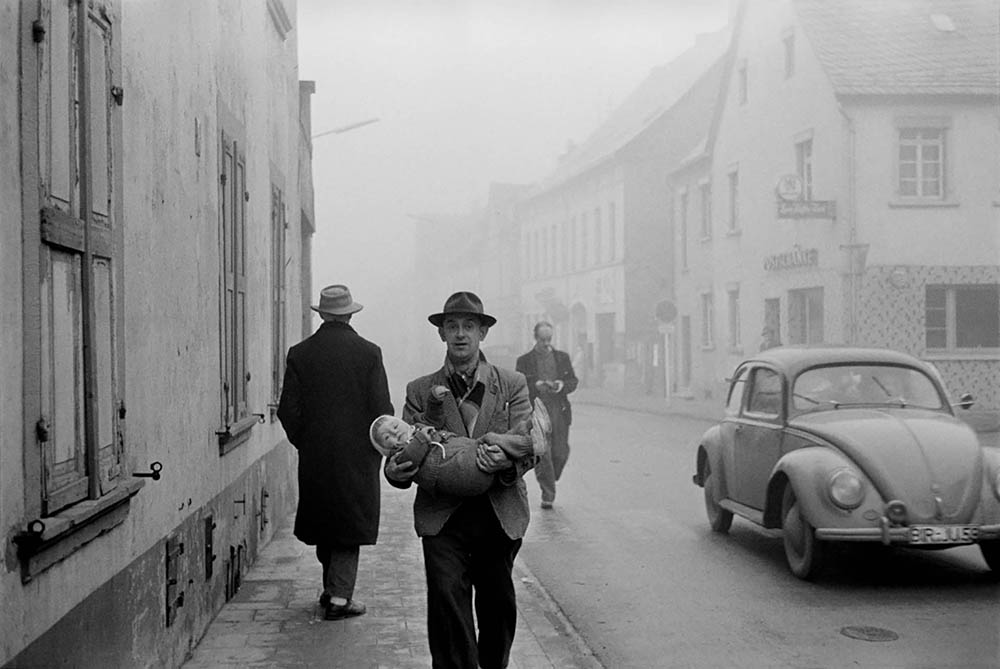 ”Germany was then simply the place where certain lines of fracture showed themselves most strongly after the war. This is what would persuade me not to make a book on France or Italy or any other pleasant subject, but to go to the precise place where opposites became exacerbated and entered into conflict.” – René Burri

It is a decade after the Magnum Photos agency had been created by Henri Cartier-Bresson, David Seymour, Robert Capa and Georges Rodger in Paris and New York in 1947, that René Burri joined the legendary agency, becoming its member in 1959.

In those same years, a very young photojournalist, German by his mother and Swiss by his father, he discovered the country of his maternal origin and went on to a Germany cut in two, in a booming recovery, to work on a documentary for the illustrated press. He then discovered a rapidly industrializing country: a Germany energized by a new youth, with its dapper cars, its lovers in bumper cars, its elegant women. After the wall between the two Germanies was erected on August 13, 1961, in the full swing of press photography, René Burri realized the importance of publishing these images. To bear witness to history, to keep it in memory.

This work was built little by little, at its own pace. It always took René a long time to manage to transcribe what he felt. But as for time, he had always had enough of it. When he didn’t have enough time, he took it. When he was not working for an order, he was developing a personal work. And even if he was going to be late, he was going to the end. It was stronger than him. It is also thanks to his pugnacity, his thoroughness and his benevolent gaze that his work was built.

Published in 1962 by Fretz & Wasmuth in Switzerland and then in 1963 by Delpire in Paris, this major series of René Burri’s the career only really met its audience a decade later. – Clotilde Blanc Burri