Animal abuse as seen by the Sorbut collective 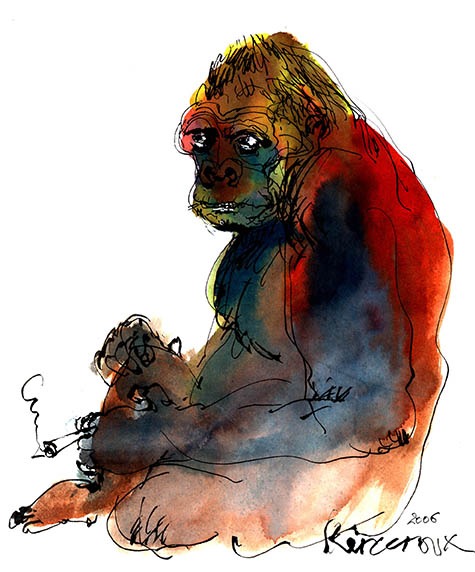 “Caricature serves a bit to avenge those who cannot speak out.”
Stefan Zweig

The FAIT & CAUSE gallery was created in 1997 by the non-profit organization Pour Que l’Esprit Vive to develop advocacy campaigns on individual and collective behavior.
In 25 years, we have showcased nearly 120 exhibitions devoted to social issues (in France and around the world). They were primarily photo exhibitions because photography is a privileged medium for exposing problems and denouncing social injustices.
In all cases, our choices were made in such a way as to highlight the photos and their ability to serve a cause.
We are increasingly aware of the seriousness of environmental and animal rights issues. In themselves and in their connection with us, human beings.
In recent years, we have held exhibitions devoted to pollution, the overexploitation of natural resources, wildlife trafficking, overfishing, bullfighting…
For “Animal Talk,” we called on the cartoonists of the Scorbut collective because we are convinced that their hard-hitting, corrosive art depicts the barbarism, violence, and cruelty with which animals today fall prey, due to greed, sadism, and stupidity.

By dint of announcing that it was imminent, the sixth mass extinction is upon us. We haven’t seen this in 65 million years – since the famous extinction of the dinosaurs. This is only the beginning: barely 2 or 3% of living things have already vanished. All experts are shocked by its rapidity.

Descartes’ theory that the animal is nothing but a machine devoid of speech and reason only fed our industrial society. Mercilessly vivisection. Countless laboratory experiments – one million mice sacrificed each year in France. Industrial concentration camps – chickens, pigs, rabbits, turkeys, ducks, etc. The making of the mad cow disease. Deep-seabed overexploitation. Aquaculture celebrated everywhere. Hunting as mass entertainment. Wildlife trafficking. The pangolin identified as a public enemy – ah no, it wasn’t him!

Topping it all off, the first mass extinction. We have come a long way since the extinction of the dodo of Mauritius (1680), of the New Zealand moa (1773), of the great penguin (1844), of the American passenger pigeon (1900), of the dolphin of China (2002). Currently, out of two million species identified, half are ultimately threatened. Even politicians are waking up. International summits follow one another to try to slow down the killing machine. The next one will take place in April 2022 in Kunming (China).

Fortunately, animals do not rely solely on decision makers. Voices are being raised globally in their favor. They wouldn’t just be commodities, food, guinea pigs, distractions, and victims. They would have their say. Teach us about us, and about this world that we share.

The Fait & Cause gallery opens its doors to them. To begin with, from January 19 to February 26, the cartoonists of the Scorbut collective address the mistreated, exploited, and overexploited animal. Then, from March 2 to April 16, they will explore alternative options. Living together should be possible.

Scorbut is twenty-four years old and has all his teeth.
In 1998, France hosted the football world cup. Everyone is delighted. Cabu, Kerleroux and Wozniak even more. These three designers of the Canard enchaîné go wild. To the point that the 8 pages of the palmipede are not enough to publish all their drawings. Hence their idea of ​​creating a website.
Scurvy!
The site then opened up to a collective of artists working in fields as varied as drawing, music, painting, sculpture and even the making of stained glass. Over the years, Scorbut will welcome the designers Cardon, Guiraud, Delambre, du Canard enchaîné. Charb, Wolinski, Tignous, Luz, Honoré, from Charlie Hebdo. Writers like Ramon Chao (or his son Manu Chao, who offers poems), journalists like Anne Jouan, Frédéric Pagès or Jean-Luc Porquet. In 2014, Vera Makina and Adelina, designers at Le Canard, and the sculptor Cébé joined him. Two years later, the stained glass artist Léo Amery.
The attack on Charlie Hebdo and the death of Cabu in no way hinder Scurvy’s will to continue. What better tribute than to continue, pencil in hand? Organization of exhibitions, concerts, film club, street art, collaboration with the Prix de la Démocratie (founded by the Marc Sangnier Institute) or with the DAL (Droit Au Logement): Scurvy continues.
Football leads to everything !

Wozniak : born in Krakow, expelled from Poland for his membership in Solidarnosc, he has been drawing with Canard Enchaîné for more than 30 years. With Cabu and Kerleroux, he founded the satirical site Scorbut. He enjoys collaborating with musicians, notably Archie Shepp and Manu Chao (books, posters, record covers). He sometimes draws live during certain concerts. He has exhibited his works from Mallorca to Cuba via Switzerland, Argentina, Mexico. He regularly supports the Droit Au Logement association.

Kerleroux : He has contributed to numerous newspapers, Politique Hebdo, Liberation, Le Matin, Le Gri-Gri International, Le Monde, etc. He has been drawing at Canard Enchaîné for over 30 years. He is one of the founders of Scurvy, along with Cabu and Wozniak. To his credit, two albums and several illustrated books.

Cardon : He published his first drawings in Bizarre, by Jean-Jacques Pauvert. Then in 1968 in The Enraged. And also in Humanity, the World, the Echo of the Savannahs, etc. And, from 1974, in the Canard enchaîné. He has participated regularly in Jean Frappat’s legendary show, Du tac au tac, and published several albums.

Adelina : a young Kazakh artist, she has regularly published her drawings in Le Canard enchaîné since 2017. She is also an active member of Scurvy, and has illustrated a number of books. A jack of all trades, she has successfully tried styling and creating cinematic posters.

Cébé : member of Scurvy, he has been painting and sculpting since the 1980s, working with the most diverse materials, steel, brass, bronze, wood or ceramic. He also produces interior and urban furniture, as well as monumental works.

Jean-Luc Porquet : Journalist at Le Canard Enchaîné since 1994, he writes there in particular on ecology and technical society, while writing theatrical reviews. He has written several books, the last of which is Le grand trial des Animaux (Éditions du Faubourg).