THE WORLD ACCORDING TO DOWN’S

Two girls discuss the benefits of a conditioner in the showers at a swimming pool. This banal exchange takes on another dimension on this day of the Special Olympics. As I watched the scene, I was struck more by what was normal than what was different. It disrupts my perception of the handicap.
These two girls, both with Trisomy 21, are surprisingly independent. The character played by Pascal Duquenne, in the film “Le Huitième Jour” by Jaco Van Dormael , remains improbable or exceptional for most of us. But how are things in real life? Around one hundred children affected by Down’s Syndrome are born every year in Belgium. Do they grow up to be happy and accomplished adults? What place do they find in society?
These questions drove me to go out to meet these people.

To become independent… a dream, a combat, a quest, a source of pride…
Day after day, with determination and courage, adults with Down’s Syndrome gain the confidence to surmount their difficulties, never giving up. Guided by their family and friends from their childhood, they gradually develop their skills, adapt to their handicap, accept their differences and develop their full potential.

“The world according to Down’s” shows snapshots of the daily lives of these people with remarkable interpersonal qualities. It is a humanist documentary, militating for a more inclusive society.

A nurse by training and a stay-at-home mother, Bénédicte Thomas has always been passionate about photography. It was during the years 2005-2006 that her photographic process evolved from archiving beautiful family images towards the passionate, daily quest that continues today… Two years at the Arts et Métiers school of Mons provided her with a vital store of technical knowledge while a photographic history course broadened her horizons.

With the human relationship being essential for her photographic approach, multiple documentaries followed each other. A considered choice. Now focused on humanist documentary, her photographs are witnessing moments of life of people from her region.

Visiting exhibitions and her abiding interest in the artist books and the exchange of experience between photographers are her main sources of inspiration. President of the Mons Royal Photo-Club and member of the De Vizu collective, Bénédicte Thomas continues her own photography while managing workshops and projects in a team.

PADIÈS – In the past, right up to the end 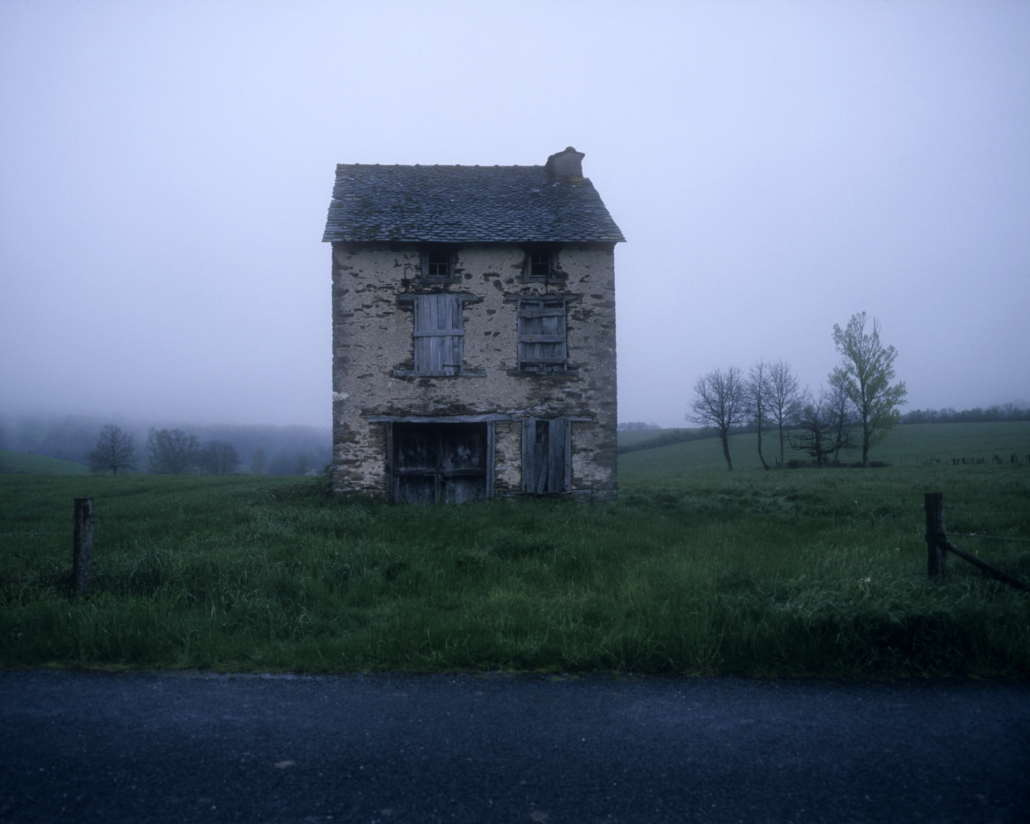 The ruins of an old farmhouse and outhouses located in Padiès, a place in the Tarn in southwestern France, appear every December when the Saint-Géraud dam, built in 1992, is opened to allow the level of the river Cérou to drop. Amongst the rocks you can make out the remains of a wood oven which was still running sixty years ago. It is easy to imagine how life must have been here. But that now is all in the past.

“– This is where the vegetable garden was…” says Louis.
He points to an area bounded by low stone walls which are still intact, and then, looking a little to the right, shows what it is left of the cowshed.

“– One day, a cobbler stopped by this house where my parents lived,” he said. “I must have been about 5 years old, it was just after the War. My father went off with him one morning to choose a tree in the forest, often it would be an alder as the wood is lighter. The cobbler would make clogs for the whole family out of the one trunk, in exchange for lodgings and a little money. During cold weather, we would put embers in our clogs to heat them up…

Nowadays you see a lot of dead wood and fallen trees in the forests. It is sad to see the state of the oak, horse chestnut and alder trees. The trees are dying off. In the olden days we used to say ‘he’s as hardy as an oak’”.
“– In the past, we gave the cows a name: Pompom, Ginger, Little Fig. Now they just have a number, they go off to the abattoir, to the scrap yard. A bullet in the head and they finish up on a meat hook.”

“– Back then, you went to school on foot by the tracks through the woods, with a bowl for soup in your hand and a few chestnuts in your pockets. More than a hundred fires burned in the hearths of Padiès and there were as many as seventy children at the school. The countryside was teeming with various tradesmen such as wheelwrights, saddlers, carpenters, blacksmiths, cobblers, coopers… A village was a society in itself, but now it is made up mainly of holiday homes, large farms and occasionally a few stately homes falling into ruin.”

Louis now lives a little higher up La Croix de Cors, with his sister. They are the only people living here. Not far from there, at Carrade to be precise, lives Gilbert Nègre, born in 1932, and just a little further on, in a place known as Champ d’Albi, lives Denise Massol, born in 1938, as well as Jean-Pierre Bouyssie, a “young” neighbour, born in 1967. All of these places, hamlets like Ginals, where Odile Puech and her dog Dick lived up until recently, evoke memories of a way of life that harks back to times past.

That was back then.

Loïc Trujillo lives in Paris.
He has been observing people, their lives and their environment with a caring and empathic eye since he was 15. His long-term projects have given rise to several publications and exhibitions. He has covered subjects such as detachment, men at work, autistic children, the poor, cremation tradesmen in India, or the nomadic life of Tibetan refugee children, but always with an approach that is both sensitive and inspired.

From 2013 to 2018, he worked on a social portrait of the disappearance of the traditional way of life, as witnessed in several hamlets in south-western France.

In 2018, he completed a documentary on the emergency ambulance service and university hospital in Lille, where he followed the lives of patients suffering from cardio-vascular disease. Subsequently, this work became the basis of a travelling exhibition.

« LE MARTYR DES SYRIENS DU KHABOUR. »
(THE MARTYR OF THE SYRIANS OF KHABOUR)
The Assyrians have been trapped amongst the warring factions in Syria since the start of the conflict in 2011.
Concentrated in the north-east of the country, their fate has become even more complicated with the issue of Kurdish Rojava and the mass arrival of Jihadists since 2013.
Syria – 2015/2020
Chris Huby

« LE VISAGE DU CHARBON »
(THE FACE OF COAL)
India is the second biggest producer of coal, after China. It is part of daily life of the inhabitants of Dhanbad,
India’s “coal capital”, in the state of Jharkhand. Coal mining is considered to be one of the world’s most dangerous professional activities.
India – 2018
Ann Johansson

« LES DERNIERS GLACIERS TROPICAUX DE COLOMBIE »
(COLOMBIA’S LAST TROPICAL GLACIERS)
Colombia’s glaciers play a crucial role in the lives of the local populations: they are a source of irrigation and drinking water for millions of people.
Furthermore they have a major symbolic, spiritual and cultural value for the indigenous communities.
Colombia – 2019
Antoine Kremer

« COMMENT LA DESHUMANISATION DE LA POLICE EXACERBE LA VIOLENCE DANS LES MOUVEMENTS SOCIAUX »
(HOW THE DEHUMANISATION OF THE POLICE EXACERBATES VIOLENCE IN PROTEST MARCHES)
“A sort of « StarWarsisation » has been applied to the units in charge of policing protest marches for the past many years.
Their equipment is more and more intimidating, and they are armed out of all proportion. Little by little, all notions of human contact have been totally eliminated.”
France – 2019
Edouard Monfrais

« GÉNÉRATION TANGANYIKA »
(TANGANYIKA GENERATION)
At 677km, Lake Tanganyika is the longest freshwater lake in the world. Global warming and increasing human activity have created the ideal breeding grounds for various forms of bacteria under the surface of its turquoise waters.
Democratic Republic of Congo – 2018/2019
Isabelle Serro

« DENGUE : TERRITOIRES ÉPIDÉMIQUES »
(DENGUE : LANDS OF EPIDEMIC)
Dengue is the world’s most widespread mosquito-borne virus. 390 million people are infected by it annually and almost 70 die every day. This documentary looks at the causes and consequences of dengue throughout the world.
Bangladesh, Reunion (France), Fiji, New Zealand, New Caledonia, Brazil – 2018/2019
Adrienne Surprenant / item

Winners of the Sophot prize 2019