Laureates of the 4th edition of the SOPHOT.com Contest

Between March and May 2013, I followed the work of « Project Harar » in Ethiopia.
« Project Harar » is an English association which organises missions in Africa to operate on people affected by the noma disease, as well as those with tumours or facial deformations such as cleft palette. Noma disease is closely linked to poverty and malnutrition. It generates atrocious disfiguration, attacking both the soft tissue and bones of the face, mainly in subjects who are very young. If they are not treated as soon as the first symptoms appear, there is an 80% chance of death; at best, they will bear physical and psychological scars for life.
Even now too many people are still unaware of this terrible affliction and there are very few associations helping its victims.
My principal discipline is portrait photography, but clearly the subject is not limited to the portrait alone. I feel that I have to highlight the necessity and urgency of bringing care to these people, who, despite living in a poor environment, may just be able to escape the destiny that this handicapping and traumatising disease has mapped out for them.
I also wanted to showcase the skill of the « men in green » in the operating theatre, in order to cast their surgical corrective action in a more « sacred » light.
We’re not talking about cosmetic surgery here. As someone once told me: “its so great just to find yourself with something that looks vaguely like a nose, to be able to unlock your teeth, open your mouth…to such an extent that many don’t even come back at the time of the following mission, several months afterwards. Most of them will however be able to return to their village with a new outlook on life, as at last they are looked upon differently.
The people shown in this series are either miraculous survivors of the noma disease, or people affected by other facial diseases.
I bear witness to their courage in « facing up » to their illness and to the world. 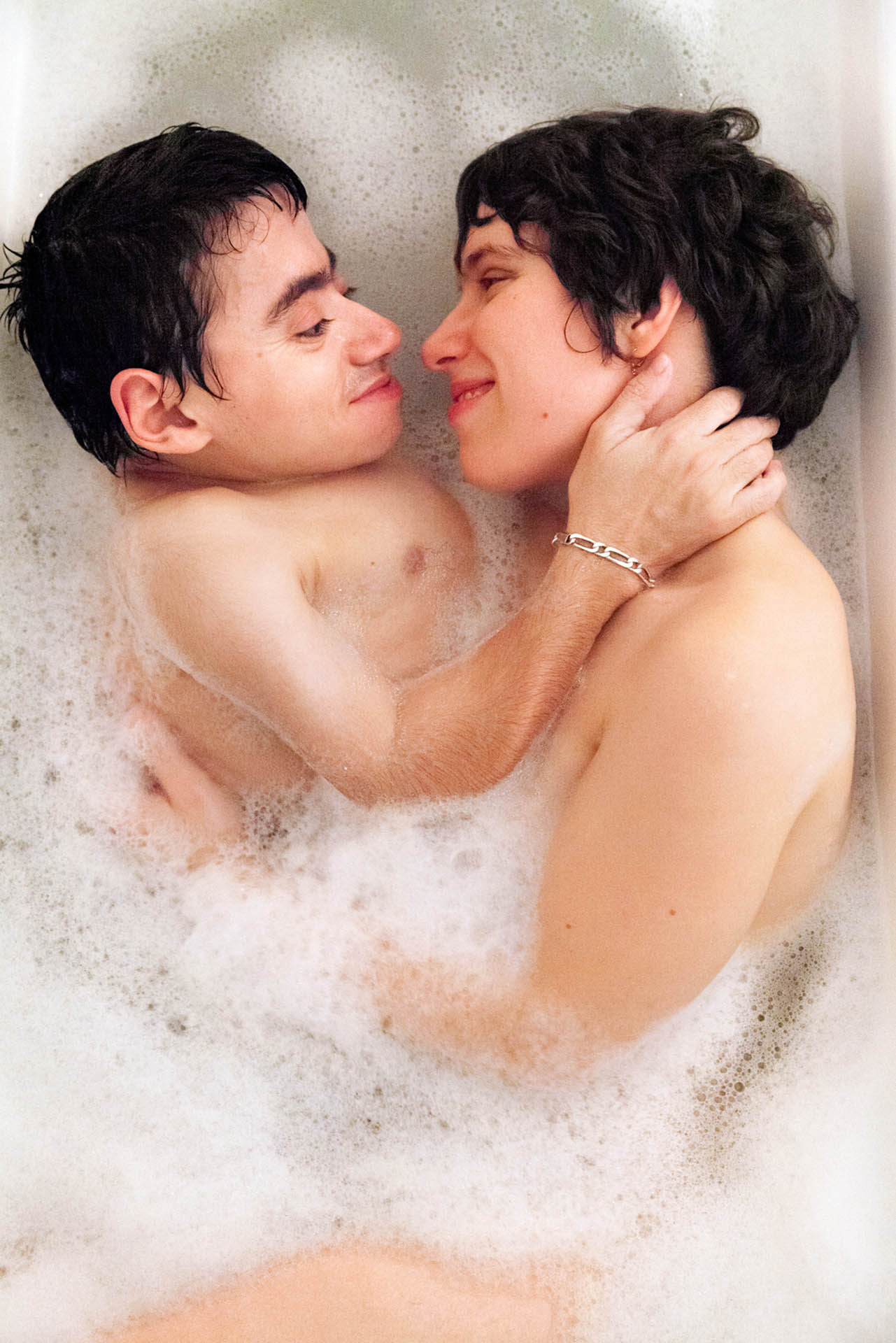 This work is a hymn to unusual bodies, bodies some people think should be veiled.
It is above all a hymn to emotions, sentiments, and to the often unexpected loving relationships that some people would wish to ban.

Everyone should have the right to feel, to have emotions, and to love. It’s as though everybody could have it all, as though you only had to wish for it to happen. These fundamental rights are nonetheless not shared by everyone.
This documentary is intended to be an ode to bodies which may cause some to avert their gaze, or which may simply remain hidden away. The twisted body, which, like any other, expresses its sensuality and emotions in the name of an ode of love, a reality felt by all of us, whatever our appearance, background, or disability.
In our society where erotic codes have become omnipresent and banal, the dictate of the image has become an inescapable constant. But while we are overwhelmed with images of sexuality, in which we are ourselves in collusion, these unusual bodies still bother us.
The media may extoll the virtues of sex and the caress for well-being of one and all, but they only refer to the stereotypes of our times and differ little from prevailing standards. It’s a rare thing indeed to see someone dwell on what is actually different. Handicap is shunned, hidden away, and the sexuality of people with disabilities is taboo.
Primarily because of their physical condition – but all too often also because “the sexually able-bodied” (friends and relations, medical staff, or even complete strangers) set up barriers – people with disabilities may not have access to sexuality. Thus in the name of the common good, and of lofty morals, the majority dictates what is acceptable, what should be allowed or not. The individual then finds him or herself confined to a pre-defined lifestyle to which he or she is expected to adapt. And society’s view of the handicap becomes a source of discrimination.”

This documentary was made with the help various couples, ranging from those in long-term relationships to more fleeting encounters. Among them are some who were not lucky enough to have found a partner, but claim the right to have a sexual existence nonetheless. The photos of Aminata and Daniel, taken in the Netherlands, serve to illustrate this point showing that there is still ample space for tenderness and attention.
First appearing in the eighties, sexual assistance is still taboo in France where the authorities see it as just another form of prostitution….especially as it falls within no legal framework. Seen by some as the right to sex, but by others as the marketing of sex, the subject provokes debate and division even while specific training courses exist in several countries in Europe.
Is not the situation of the handicapped just a reflection of how people perceive those who are different in their midst? Just because their bodies are “damaged”, should the handicapped have less rights than the others? Should we consider sex for the handicapped as a secondary subject? Perhaps we tend to forget that there is a human being hidden behind a handicap?
The barrier between the able-bodied and the handicapped is most often erected by the able bodied, and is generally motivated just by preconceptions or miscomprehension. When those barriers fall, all that remain are two beings who find themselves face to face and …. so alike. This documentary is about looking differently at one another. Handicaps that appear here, fade away elsewhere, and the images are easier to bear. It is proof if need be that it is all a question of appreciation.
Why does this difference bother me? Is it not more for me to adapt myself? To take the first step, go beyond the established models and “virtuous” ideas….eternal obstacles! It is the route that the people in the photographs here dared to take.

They dare to show themselves to defend a cause that they consider is their own, but really it concerns everyone: is love not universal?
Jérôme Deya