Laureates of the 6th edition of the SOPHOT.com Contest

THE WOMEN OF THE CASA XOCHIQUETZAL
Bénédicte Desrus

THE WOMEN OF THE CASA XOCHIQUETZAL

In 2008, Bénédicte Desrus discovered the existence of the Casa Xochiquetzal, a retirement home for prostitutes in Mexico. Fascinated and interested by the story of these women, she wanted to get to know them better, intrigued by this question:

What happens to prostitutes when they get old?

So she decided to do a documentary on this place, unique in Latin America.
Twenty-six women, aged from 55 to 86, have found refuge at the Casa Xochiquetzal. They had nowhere else to go in their old age. Since it was set up in 2006, more than three hundred women have been lodged in this old colonial mansion. Here they have a roof to sleep under, several meals daily and free medical care. For most of them, it is the first time in their lives to enjoy such conditions. In order to have the right to stay there, they take part in workshops and study groups. On the fringes of society, often cut off from their own families, weakened by age and various illnesses, they try nonetheless to recover their dignity.
Bénédicte Desrus’ photographs capture the dignity of these women, highlighting their courage and the stories they have to share with a society that has rejected them. This documentary shows that we have much to learn from the most marginalised people around us.
These photos encourage the public to reconsider women’s rights and the discrimination and stereotypes surrounding sex workers, making them think again about their preconceived notions on the subject. Her documentary also aims to promote the work of the Casa Xochiquetzal, in order to stimulate similar initiatives elsewhere.
Over a period of four years, Bénédicte Desrus photographed the daily life of these women, before inviting the Mexican author Celia Gómez Ramos to discover the Casa Xochiquetzal. In 2012, they launched together the project of a book, Las Amorosas Más Bravas (The bravest of lovers). In March 2014, the book, combining text and photos, was published in Mexico in a run of 1000 copies.

Part of the proceeds of the sale of the book went to the Casa Xochiquetzal, to improve the living conditions of its residents; the project aims also to raise finds through donations. But the main objective is to bring these women out of anonymity and render them visible to a society which has chosen to ignore them for too long. In short, this work is a homage to age and to human dignity. 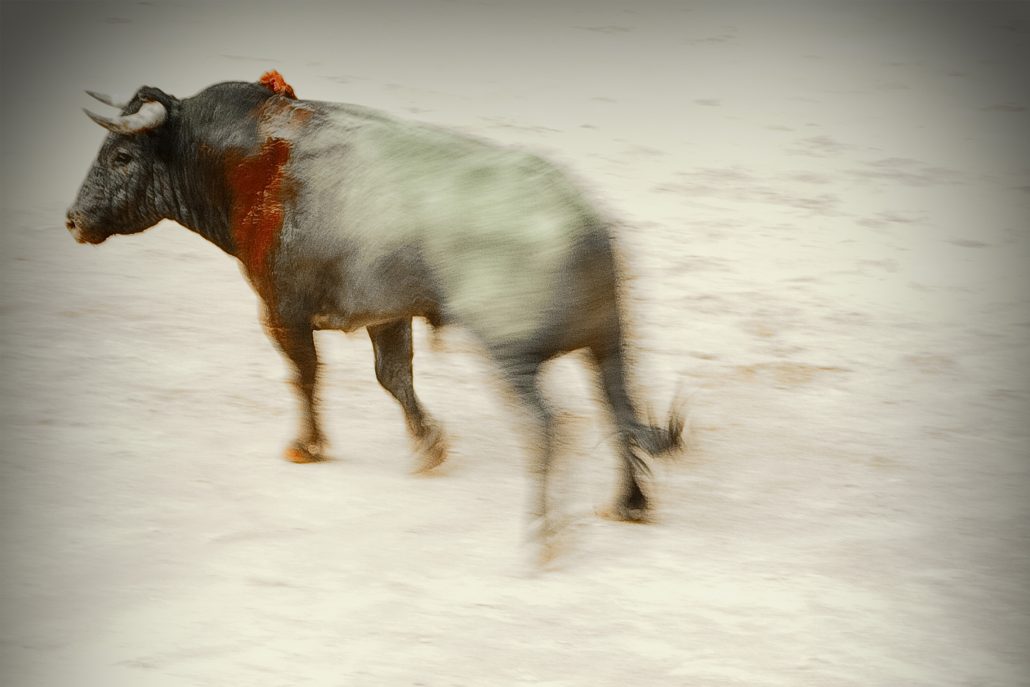 This work is part of a long-term photographic project with the theme of animals outside of their natural habitat, how they adapt to their new surroundings and their relationship with man.
In the Western world, you can see the impact of man’s rule over animals every day: consumption of meat, fish and animal-based foods, various fats, cosmetics, leather objects. Domestic animals, animals reared in captivity, animals assassinated perfectly legally. In France, around 700 bulls are killed every year in bullfighting rings.
For these photos, I wanted to use a marked style that would depict reality as fiction, all the while accentuating the grotesque and cruel nature of bullfighting. I wanted the colours to be like imaginary effects resounding to the silent cries of the toro. NO !
The moments of combat that I have chosen to represent all seem unreal – even though they are very definitely real – reinforcing the theatrical nature of the gratuitous killing of an animal by characters whose gests and postures would make you think more of a puppet show than a supposedly cultural ritual proudly obeying traditional rules.
It is for this reason that I have chosen not to show the spectators present in the ring.
Picadors, banderilleros, matadors or areneros all move around like wind-up robots performing the same rituals six times over… In a given bullfight, six bulls will be killed.
Even though today, in 2016, bullfighting is still not banned, it has gone out of fashion and attracts less and less spectators. They prefer nowadays to go to see the courses camarguaises or to a Recordatores show – an acrobatic spectacle where men jump over bulls without a single drop of blood being spilt.
It should be noted that bullfighting is allowed only in three countries or regions in Europe: Spain, Portugal, and southern France.
In France, cruelty to animals is covered by article 521-1 of common law but there is an exception for bull- and rooster-fighting “when the existence of an uninterrupted local tradition can be shown”.
In June 2015, the Appeal Court in Paris judged in favour of animals’ rights associations by deleting bullfighting from France’s list of intangible cultural heritage.

Already, more than 150 years ago, Victor Hugo, like many of his contemporaries, was shocked by bullfighting: “Torturing a bull for pleasure, for fun, is much more than torturing an animal, it is torturing a conscience!”

Jules TOULET
« Made In Bangladesh »