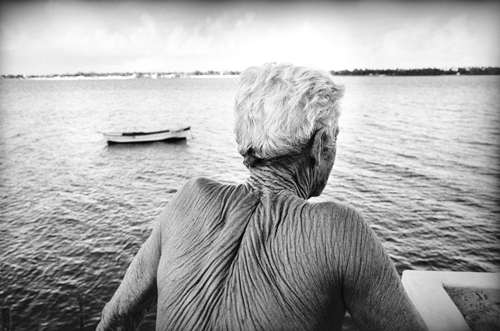 Jose Martins Ribeiro Nunes, also known as Ze Peixe or ‘the fish,’ has become a legend in Brazil for his extraordinary lifestyle. At the age of 74, Ze Peixe is Brazil’s most famous boat pilot, meaning he guides ships from the ocean into the port. His renown comes not from what he does, but from how he does it—by swimming approximately 12km in often-choppy waters at the lead of the boats. For more than half a century Ze Peixe has been fearless in his commitment as a boat pilot risking his life to escort sea vessels in and out of the Sergipe River, a bay entrance considered very dangerous because of its constant changes in sand movements and unexpected sand bars. There is, however, one thing that is certain amongst these treacherous waters, having Ze Peixe as a guide guarantees the safety of the ship and the sailors aboard. Ze Peixe leads a very minimal and eccentric lifestyle, rarely eating, and drinking only water from fruits. Most of his time is spent underwater and he has become famous for his impeccable way of treating people, for his work as a pilot, and his ways with the sea and nature. As writer Beneti Nascimento wrote so eloquently about Ze Peixe, "The greatness of this man is known all over the world, he is a living super-hero, with a sparkle in his eyes and always a smile. He is a man…who does not know what danger is, has no fear, not even when facing death."
Country : Brésil