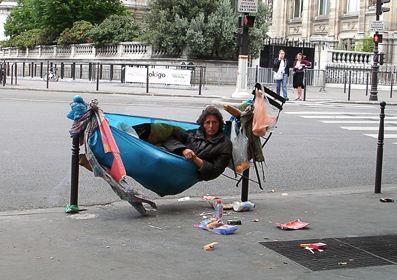 Living on the streets in the XXI century They used to be called ”tramps”, but today they are referred to as the homeless. An expression that designates all people who find themselves living in extreme poverty and exclusion. The term is more often associated with their appearance, which bears witness to their instable lives: dirty, smelly, worn out clothing, battered faces, bad teeth, hands and feet that divulge the misery of street living. Today, however, the face of that community has changed. You’re just as likely to encounter people without a steady job, the unemployed hoping to find affordable lodgings, young people without families and not even a minimum income, drug addicts, former inmates, the insane who should be in mental institutions, the elderly who should be in retirement homes… Through my work, carried out in quite a number of countries, I would like to sensitize the public as well as the politicians to this social problem and compel them into some kind of reflection. My photographs are a testimony to this harsh reality. And that, in my opinion, is the job of photojournalism. I have always been fascinated, intrigued and impressed by people who live on the streets and I want to pay homage to them by confirming that they exist. We have a duty of solidarity toward these men and women left by the side of the road, in total desperation.
Country : Belgium, Belize, Colombia, Croatia, Cuba, Cyprus, East Europe, Egypt, Finland, Germany, Spain, United States, West Europe
Place : Bruxelles