The Zapatista insurrection in Mexico 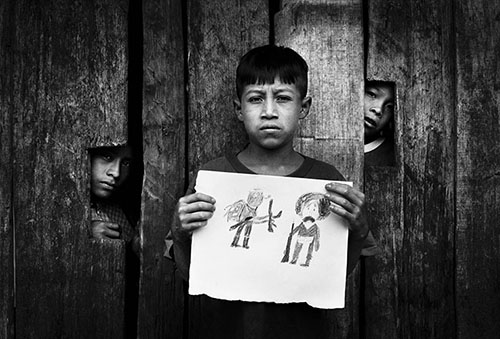 “In 1994, when the world discovered the indigenous uprising in Chiapas, one of the poorest states of Mexico, few realised that it was a new and durable form of struggle, which would rapidly become an emblem for the alter-globalisation movement. Winning a World Press Photo award, Mat Jacob’s work, covering more than twenty years, is a sensitive and accurate account of a non-violent revolt, aiming to promote self-determination and solidarity between autonomous communities as opposed to the pursuit of a more formal type of administration. The Zapatista movement – as much a cultural as a political one – embodied by the famous and enigmatic Sub-comandante Marcos, wielded influence due to longstanding popularity at home and recognition from abroad. Mat Jacob’s photos are a true reflection of the dignity and determination of these women and men writing a new page in the long and captivating history of struggles for freedom”. Benoît Rivero (Responsible for the photographic section at the publisher Actes Sud, assistant director of the Photo-poche collection)

“…The Zapatistas show that it is possible to start building another world right now, based on the respect of territorial individuality and of multiple ways of life, while staying clear of the conventions of the consumer society, of competitive individualism and the compulsive “productivism” that is destroying the planet. They show that the concept of community and of a good life for all are not necessarily best served by the conventional model of the State. Notwithstanding extreme difficulties, the Zapatista women and men have opted for freedom. They have developed their own methods of governance. They defend and strengthen the ways of life that they see as their own. They have taken their lives in hand. It is this air of freedom – and of dignity – that you breathe in Zapatista territory. It is through this air of freedom that their experience, albeit fragile and isolated, touches and looks at us.” Jérôme Baschet (Historian, senior lecture at the Ecole des Hautes Etudes en Sciences Sociales, Paris, and the Universidad Autónoma de Chiapas, in San Cristóbal de Las Casas – Mexico.)