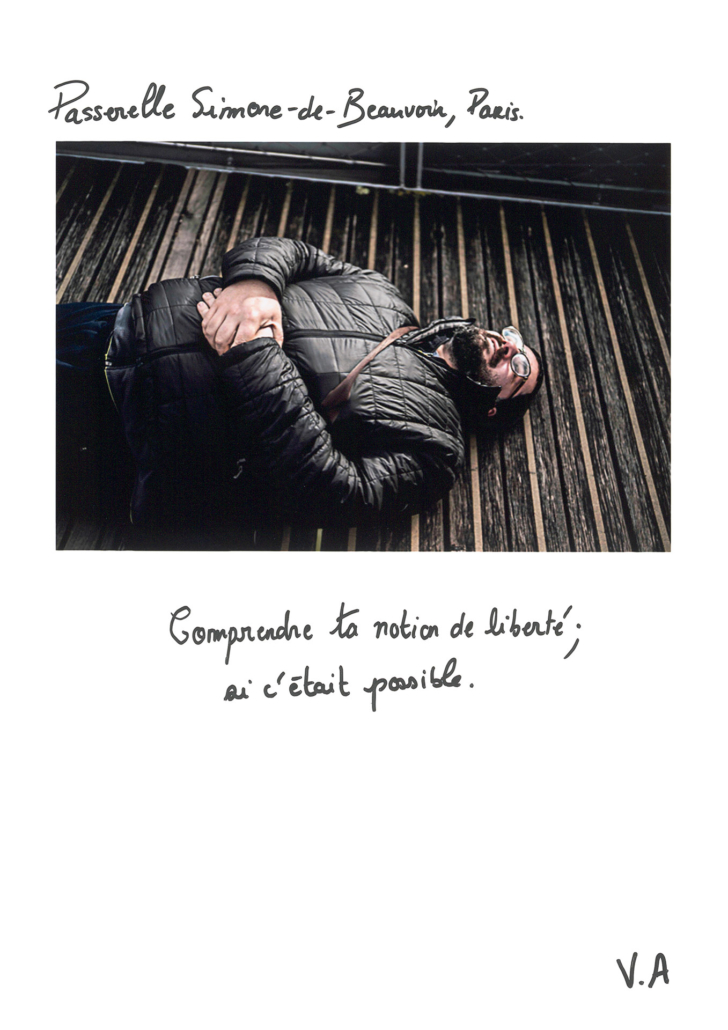 The Caritas Photo Sociale Prize aims at valorising the work of photographers who ensure the visibility of poverty, precariousness and exclusion in France. By supporting new looks and a diversity of photographic productions, the prize is also acting to increase public awareness.

JS and Victorine met over coffee thanks to the La Cloche association dedicated to creating a social fabric and changing the way we look at life on the street. From this meeting emerged the desire to create a project together. Victorine started by following JS around the places which belong to his story: from the Parc de Bercy in Paris where he arrived in 2015 to the Bois de Vincennes where he has been staying since then.

“I wanted you to imagine yourself what I could experience in certain places. I tried to make you understand what it means to be in place of”, confides JS.

Little by little, a relationship is installing, but very quickly, a question comes up: how to convey a reality which is not native to her? So they decided to collaborate in the was each of them uses the camera with a condition set by JS: to avoid taking “cliché” photographs of living on the street.

In some of his photographs, we discover an almost omnipresent nature, a form of serenity contrasting with some of his texts where we can feel anger. “It’s a scream, a ‘help’ for all people experiencing loneliness, isolation and the protracted administrative process”, explains JS.

Through this series, we are voluntarily not focusing on the details of JS’s life to concentrate on the meeting of two perceptions from two different lifestyles. Each image is followed by an exchange without taboos, a more intimate and natural one, around their photographs. The latter become a tool to communicate on their own, in a more direct, more personal and easier way.

“This project allowed me to express my anger,” says JS. Writing on the prints becomes necessary. There, they tell and confront their points of view which are more alike to a dialogue. These photographs become an attempt to break down prejudices against a way of life often considered marginal and unthinkable.

“In the Open Air” becomes a photographic discussion that does not try to talk about “living on the street”, but rather to discover a poetic side of this way of life, which does not prevent loneliness and isolation. “We are quiet here, there is a real life in the bush”, concludes JS.