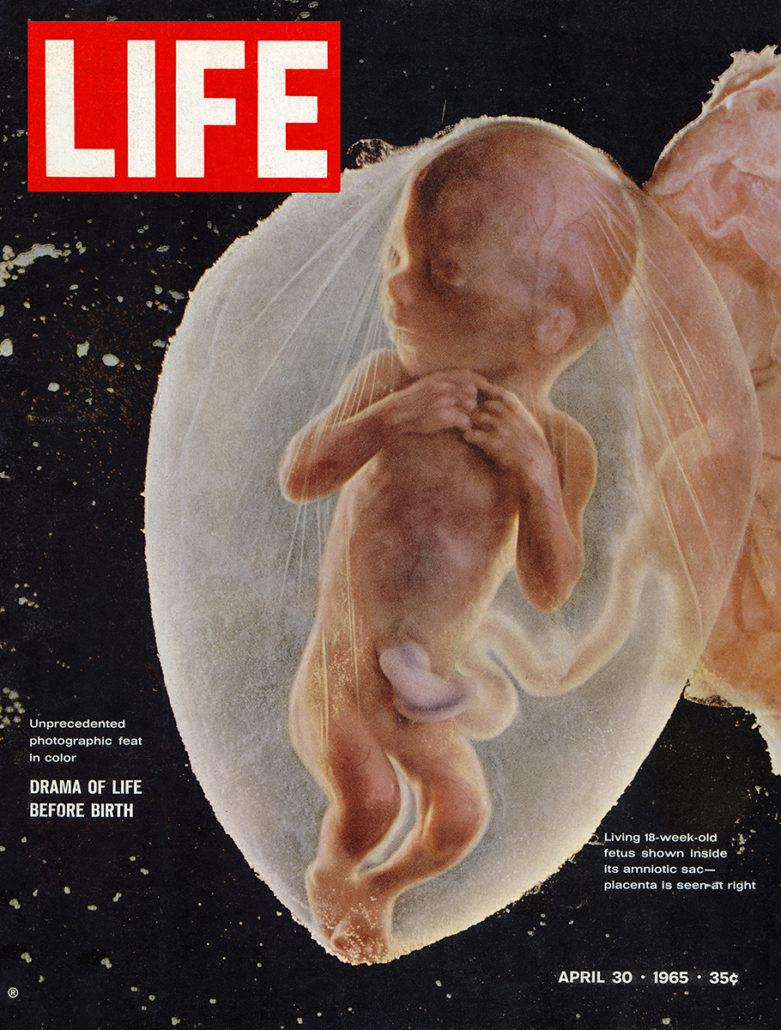 On 30 April 1965, Life Magazine put a photograph on its cover that was about to make history: The image by Swedish photojournalist Lennart Nilsson (1922–2017), entitled Foetus 18 Weeks, caused a sensation. What until then had only been seen by merely a handful of scientists and physicians now became visible in full colour and crystal clear detail to the general public: life before birth.

The total print run of the magazine, 8 Million copies, was sold out within a few days, the issue became the fastest-selling copy in Life’s history, outnumbering even the moon landing and the Kennedy assassination. German magazine Stern subsequently also bought the pictures as did French Paris Match. Already in the same year, Nilsson published an extended version of the photo essay in a book intended for parents to be, A Child

is Born, which became an instant bestseller and still is today. It has been translated into 20 languages and to date has sold over 50 Million copies in six editions.

Today, 55 years after their original publication, in times of 3D ultrasound technology, the quality and the rich- ness in detail of the pictures, made years before the use of sonograms became a common practice in hospi- tals during the 1970s, is still astonishing. Nilsson started with working on the series in the 1950s, equipped with special cameras, lenses and endoscopes provided to him by and developed in cooperation with compa- nies like Zeiss or Jungners Optiska.

Beyond the technical pioneering achievement, it is the huge cultural impact of the pictures which cemented their status as milestones of twentieth century photography. Single-handedly they shaped the popular imagi- nation of child development in the womb – though only part of the photographs were actually taken in utero and the majority of images comes from either miscarried of terminated pregnancies. The photographs and their particular aesthetics – the fragile foetus, almost transparent, floating serenely in front of a dark back- drop – seized the public’s imagination in the 1960s. In a decade torn by social and political upheaval, they became icons of the universal promise of humanism and a still largely intact believe in progress. With the publication of the images, pregnancy and prenatal development all of a sudden were a public matter, and

it didn’t take long before the photographs were hijacked by the pro-life movement, a use to which Nilsson deeply objected.

Focussing on Nilsson’s masterpiece of 1965 and accompanied by original documents from the archive of Lennart Nilsson and extensive examples of the publication history, WestLicht follows the career of the photo- journalist from his beginnings, showing examples from his rarely seen early science photography and his re- portages, which led him from a Swedish midwife to the Congo and the Arctic, from a shooting with Hollywood actress Ingrid Bergman to the Viennese architect Josef Frank.

PRISON, BEYOND THE WALLS