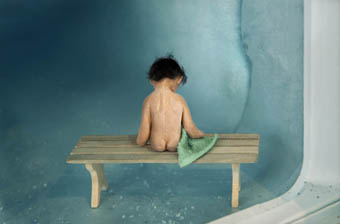 (everything’s gonna be fine), an art project against child abuseIt all started in Belgium, in 1996. Marc Dutroux kidnapped two little girls, Julie and Melissa. He raped them repeatedly over a period of many months. Then, while Dutroux was incarcerated on a minor charge, the two girls imprisoned in his cellar died of hunger. Ever since then, their suffering has stayed with me, tattooed on my soul. The idea for the project “notre petit secret…” (everything’s gonna be fine) came to me ten years later. I was flying back to Paris from a photo shoot in Thailand and Cambodia, for the Swedish edition of Elle. The piece was about UNICEF’s work with HIV-infected children. Although the article was uplifting, personally I felt sick. I was haunted by the photographs I had NOT taken: of thousands of miserable street children, selling their emaciated bodies to whomever would buy them a bowl of rice.Sitting there on the plane, I felt suffocated among all the single male passengers flying back home, satisfied smirks on their faces. It seemed so obvious to me, as brazen as if they were actually wearing souvenir T-shirts with “sex tourist” printed in bold letters. But what could I do? What, besides close my eyes and pretend I was mistaken, pretend I hadn’t read their expressions?Yet when I closed my eyes, what I saw was much more disturbing. Men touching little boys. Naked men on filthy hotel beds asking scared, smiling teenage girls to “be nice.” I saw every rape, every childhood destroyed. Still other images came to me, images I had always tried to keep at bay. Parents beating and starving their babies to death. Child soldiers. Child pornography. Every sick story I had read in the paper or heard on the news. Unbearable pictures.I could never allow myself to take pictures like those I saw in my head. Such photographs would be just another form of child pornography – I would be complicit with the crime. Then I had a vision: a dollhouse. My daughter’s dollhouse, a perfect Victorian world in miniature, so delicate and innocent. Like a soothing whisper in the ear of a crying child: alles wird gut (“hush now, everything is gonna be ok” in German). In that moment I understood: not only did I have to take action, I had the means to do so.
Child abuse is a taboo. To show a taboo might sound like a paradox. But what if I were to use fiction to tell the story? The idea of my daughter’s dollhouse gave me a way to do it, without implicating the victims.
Soon enough I realized that I needed to get physically involved in the project. I had to make everything myself. I began to build little cardboard boxes with detailed interiors and lighting design. I sculpted the characters and arranged them in scores of scenarios, which I then photographed. Creating the little figures could take several days. As I molded them, smoothing their cheeks and bellies with my fingers, I grew close to them, close enough to share their feelings: not only the victim’s pain but the predator’s excitement, too. It was a frightening experience, believe me.
None of my photos shows the actual scene of abuse or violence. The “act” itself is never presented. That would have turned my work into a crude peepshow. Instead I force viewers to fill in the missing parts with their own fears, empathy and imagination.
Katrin Jakobsen,
Paris 2011