Kids Behind Bars. Inside Filippino Prisons 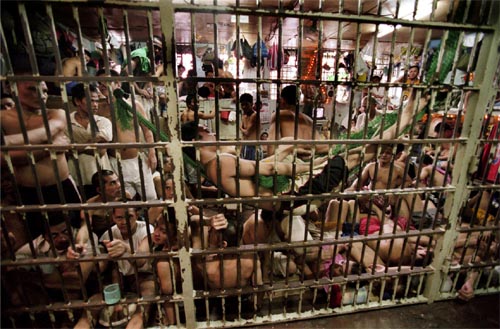 “It is said that no one truly knows a nation until one has been inside its jails. A nation should not be judged by how it treats its highest citizens, but its lowest ones.”

Nelson Mandela. With exclusive access into the Prisons of the Philippines I have captured a set of images that show a reality, where out of society’s sight, children are imprisoned without a voice in conditions that only can be described as ‘Victorian’. I gained access into four prisons in and around the Philippines capital Manila. Going in as an ‘aid worker’ I saw sights that most of society will never see. The most shocking was a jail called Taytay. Only measuring 1 metre by 5 metres, I found two children among the thirteen people in this tiny, inhumane space, crammed in like animals.
I saw children detained in overcrowded prisons and inhabitable conditions. In flooded and damp cells, with little light and stifling heat and no fresh air the children’s health is being affected. Many of the children I saw had skin conditions after being months, even years in these conditions.
There are an estimated 68,000 children in Philippine adult prisons throughout one year. Some as young as 9. Most are illegally detained in prison for trivial offences and many are held on mere suspicion with long delays in the justice process.
The youngsters are subject to sexual abuse by the guards and other prisoners. The cells are overcrowded with prisoners having to stand while others sleep on the concrete floor. Diseases spread quickly and the children are most vulnerable. They are weak and malnourished with their daily food allowance being only P33 (approx 30p). Enduring intense heat, lack of ventilation, little exercise or recreation, having to lean or squat on the floor 24hours a day brings depression, despair and causes mental and physical breakdown. They live in fear of bullying and beatings by guards and inmates.
An adult prison is no place for a child.