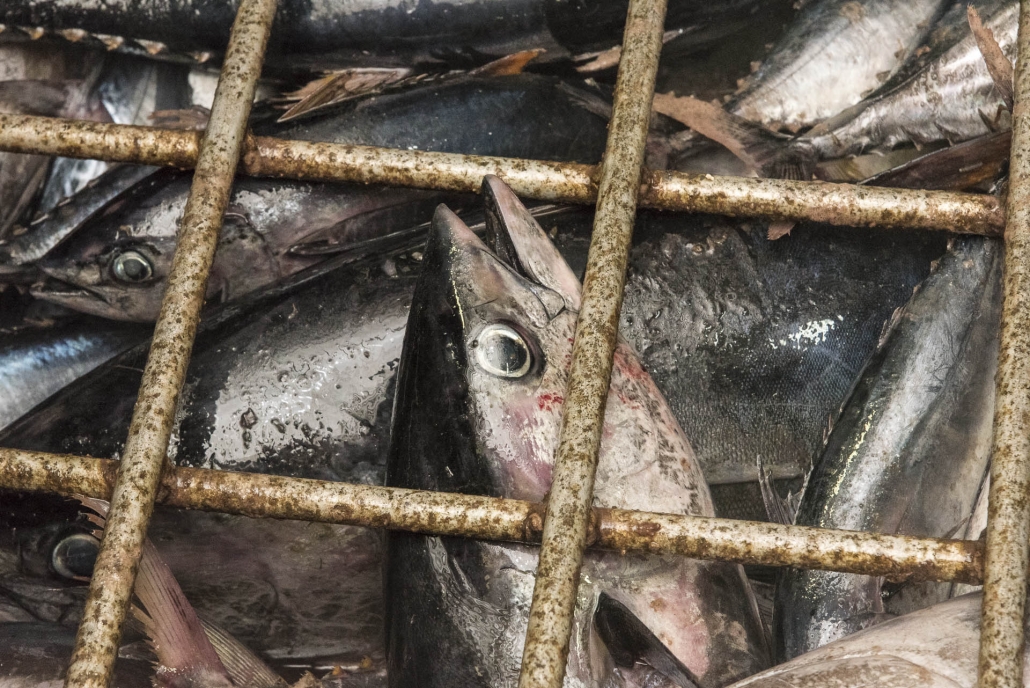 Nine weeks reporting on the subject of industrial overfishing in West Africa, on board the Greenpeace boat Esperanza …

The international organisation for the defense of the environment, Greenpeace, commissioned me as photographer to follow their operation “Hope” in West Africa in 2017. An odyssey on the high seas between Cape Verde, Sierra Leone, Mauritania, Senegal, Guinea-Bissau and Guinea Conakry.

As these countries lack the necessary resources, the marine zones that we covered are rarely patrolled. For this operation, Greenpeace provided logistical support for a dozen fisheries inspectors, mandated by their respective governments, to allow them to control ships present in the Exclusive Economic Zones that extend 320km off the coast of the countries concerned. A helicopter combed the vast area of the operation to localise the ships which we then approached using inflatable boats launched from the Esperanza.

In my role as photographer-observer, I participated in all the 21 patrol flights and I accompanied the inspectors on board 37 trawlers of various nationalities to photograph the proceedings of the controls.

Eleven ships were detained and redirected to port, caught in the act of committing serious offences. This alarming offender rate of 30% confirmed the suspicions of pillage of resources in a context of blatant and uninhibited corruption.

Industrial fishing organisations are now sufficiently well equipped to empty the oceans. Everywhere there are those who cheat to serve their own short-term interests, even if that means stealing resources from the world’s poorest populations and eliminating their traditional ways of fishing.

On the numerous decks that we visited we could hear the sounds of the never-ending agony of thousands of marine creatures torn away from their natural habitat with unheard-of mechanical violence…. We witnessed the terrible waste of fish, “collateral damage”, killed for nothing because they were of no value in the markets that the ship owners worked in.

As if that was not enough, this abuse of animals and of the environment goes on in a context of human exploitation where not only the fish are menaced…. Health and safety conditions on many boats were from another age.

During this intense operation, I had the privilege to live some exceptional moments close to a world of which few people are aware, hidden as it is beyond the horizon. I hope that my photographs convey something of that world…

Born in Paris in 1956, Pierre Gleizes became a photographer having abandoned his studies in agriculture…

In 1978, he was the photographic assistant to the audiovisual department of Yves Saint-Laurent / Charles of the Ritz, and then in 1979, worked as photographer for the Ministry of Culture on the archeological dig at Orléans cathedral.

From 1980 to 1984, he was the official photographer for Greenpeace and set up their photographic library. He participated in many of their campaigns on the world’s oceans – whale hunting, seal hunting, pollution, nuclear testing….

From 1984 to 1990, he worked as photo-journalist for Associated Press. “2200 news subjects covered in the space of seven years. Lots of travelling, with my camera bag beside my bed, shots taken almost instantaneously in all circumstances to get the perfect image, the race against the clock to meet the publishing deadlines of the world’s press… it left me out of breath, but it was a fabulous hands-on training experience”.

Between 1991 and 1998, he took on the role of reporter-investigator at the Environmental Investigation Agency for which he tracked poachers of wild animals in Africa, Siberia and Japan. Investigation, discretion, risky assignments… the E.I.A. used his photographs to illustrate the investigative reports provided to delegations attending international conventions, from lobbies to the highest levels of government.

From 1991 to 2017, he continued his work with Greenpeace, embarking on thirteen of the organisation’s vessels in the course of 180 documentaries.

Pierre Gleizes, an independent photographer, has lived since 2009 as a nomad on the French fluvial network aboard his boat, Nicéphore. His experience, often gained in hostile or turbulent conditions, with Associated Press, Greenpeace, and the E.I.A, has helped him to develop a sense of patience, reactivity and a cool head as well as technical capabilities adapted to all situations. All these talents are of use to him in his personal approach to his subjects and their environment, adapted to his taste for the unexpected in his photographs.

His photographs are distributed by the RÉA agency, in Paris, since 1998.