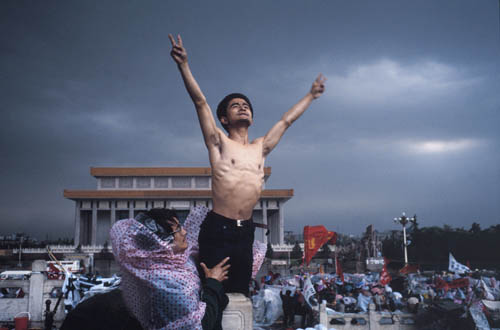 Amnesty International and its photographersAmnesty International has borne witness to violence in the world for more than 50 years.
Its reports, the result of investigations conducted in the most varied of situations, identify, condemn and publicise the violations of human rights committed daily worldwide. The strength of these reports has led to a heightened consciousness and mobilization of citizens throughout the world. Heads of state, governments and those in the public eye are regularly forced to assume their responsibilities.
Droits de regards is based on the close ties that Amnesty International has forged with photographers since the very beginning. The selection presented here constitutes a flagrant record of the barbarity of the past decades: from the summary execution of a prisoner to the headlong flight of a little girl whose village has just been bombed with napalm, from crimes of genocide to the massacre of political opponents, from the distress of immigrants to the trauma of beaten women, from child slaves or prostitutes to men and women made homeless by the rule of the economy…
But make no mistake, the aim here is more to highlight the role played by photography in the combat for human rights than to record the horrors of the world.
Some of these photos, thanks to their emblematic status, have contributed to a modification of the perception of the very events which they have recorded. Others show people whose whole lives have been dedicated to the fight for human rights and who have become icons in themselves, such as Martin Luther King or Nelson Mandela. Finally, many bear witness to victories, such as the victory of women voting, learning, or defeating the killers of their children….
In this tale, full of contradictions, about human rights – without doubt the major crusade of our times – photography plays an essential role. Photography shows events as they happen, and later on, serves to keep alive our individual and collective memory.
Photography also serves as an important support for organisations, such as Amnesty International, whose mission it is to identify, condemn and publicise human rights violations.