Laureates of the 8th edition of the SOPHOT.com Contest

GROENLAND – The dilemma of ice

« The dilemma of ice » story is part of the project Humans&Climate Change Stories (www.humansclimatechange.com), which aims to provide a documentary approach to the effects of climate change on our lives. We are following 12 families scattered around the globe, who are subject to different types of climate change phenomena, over the course of the next 10 years. Through their stories, we will gain a better understanding of the effects of climate change on our daily lives, and our capacity for resilience. It also puts the social, economic and political forces that have an impact on environmental phenomena into perspective.
The project offers an immersive multimedia form of storytelling. Humans&Climate Change Stories is supported by the Swiss Agency for Development and Cooperation (SDC), the International Organization for Migrations (IOM), and the Greens – European Free Alliance (Verts-ALE) in the European Parliament.

Long ignored, the Arctic has become an important geopolitical space. The melting ice has sparked competition and speculation around important mineral resources – including rare earth and uranium – hydrocarbons, as well as around new commercial shipping routes. Greenland, eager to overcome its economic – and ultimately political – dependence vis-à-vis Denmark, is today faced with a dilemma: the exploitation of resources that are challenging to harvest versus the preservation of its environment which is central to all Inuit culture.

In the face of a new global context and the risky investments that offshore exploitation represents, three major oil companies abandoned their exploration licenses in 2016. Greenland is thus basing its hopes on the fishing sector, which accounts for 90% of its exports, and is the main livelihood of the rural population.

Melting ice, accelerated by global warming, is now flowing into the ocean for nearly 8 months during the year versus 5 months ago 20 years ago. The government and private fishing companies are offering fishermen the ability to outfit themselves with ever more modern equipment. This increases the risk of encouraging intensive fishing while at the same time climate change is having a major impact on the abundance of fish. It also leads to a risk of dangerous dependence on the part of the fishermen who have few opportunities to covert to other professions. Some are already over-indebted and cannot survive more than one or two bad seasons.

In 2016, the state-owned company Royal Greenland posted a record profit of 954 million euros. The fish are primarily exported to American, Asian and European markets whose demand has doubled in 25 years 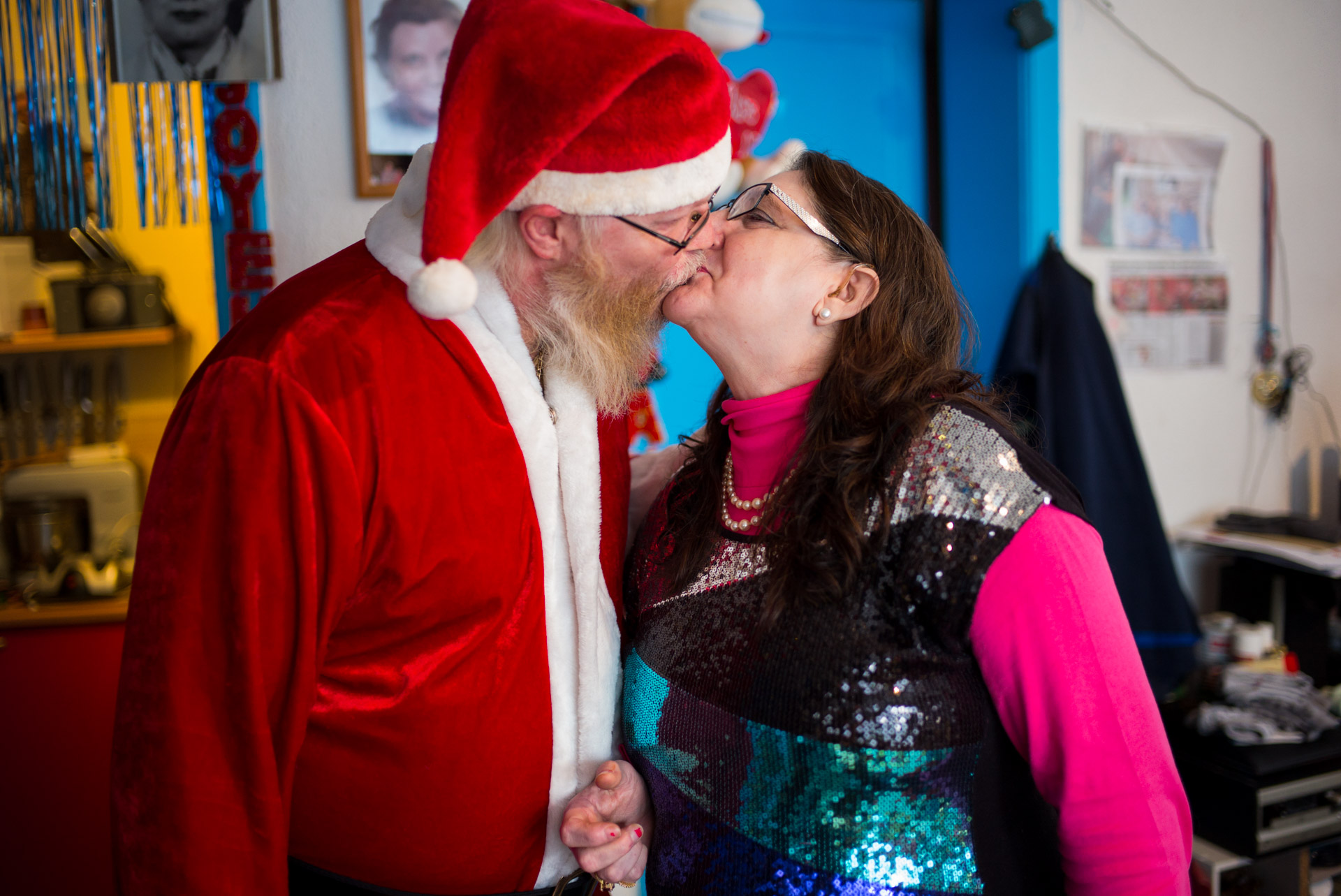 “The southern area of Lille is transforming. But from one generation to the next, its inhabitants remain attached to the neighbourhood. The ‘barre des Biscottes’ (two eight-story buildings) has disappeared to be replaced by new housings, existing alongside townhouses dating back to the 1930s. The central police station is now trying to restore a sense of calm after long periods of discord.
On that day, the rain caught me by surprise. I sheltered myself under a porch, already occupied by a man and a woman: it was time to walk the dogs.
She said hello, and saw my camera. We exchanged a few words.

_’I’ve always dreamt of meeting someone to tell our story, you’ve been sent by the Lord…’

Usually, when we think of a story, we think of words. But Jacqueline is illiterate, and maybe that’s why it seems normal to her that her life could be told through photographs.
I was welcomed within this couple’s everyday life. They shared a spontaneous language, with natural gestures and singular traditions. A little world, more organized than it seemed, where we can find a dogs’ godmother and Santa’s car…
In that difficult social context, I discovered a soft and bright life, scattered with humor and full of modesty. Everything about Jacqueline and Serge moved me: their honesty, their simplicity, and their way of life… The barriers came down, and the relationship took hold with a lot of humility.
I went to their house on the day we met. Then we met again, and again. Sometimes we ran into a neighbour or other people related to her.
When talking to them, Jacqueline reminded who I was:
_’She’s a photographer, she’s telling my story!'”

Geoffroi CAFFIERY
« DIS PAPA »(« Hey Dad »)
Deeply moving chronicle and testimony of a life that goes on despite the illness: schizophrenia.
A father’s images and writings act as evidences of the representations of isolation, confusion and psychological suffering.

Corinne ROZOTTE
« MÉMOIRES D’ENFANCES EXILÉES »(« Memories of Exiled Children »)
The story of « The Children of Creuse » brings us back about fifty years from now when children from the Reunion were exiled and brand to Creuse, France, following the order of Michel Debré, then deputy of the Isle of Reunion.

Natalya SAPRUNOVA
« ATHÈNES : portrait d’une ville après la crise »
(« Athens : Portrait of a City after the Crisis »)
As Greece is emerging from the depth of the economic crisis, the Athenians feel betrayed by their government. Athens’ faded frontages are overflown by screams of rage and hope that cover the walls…

Jeanne TARIS
« LES GITANS DU QUARTIER SAINT JACQUES »
(« The Gypsys of Saint Jacques »)
“A lingering sadness prevails within the neighbourhood. Unlike Andalusia, we don’t hear music playing in the street, few kids play games for their age. Women and children have no hope, they live on a day-to-day basis because they have no tomorrow…».

Bertrand VANDELOISE
« RENCONTRES SUR LA ROUTE D’EUROPE »
(« Encounters on the European Road »)
In the refugee camps, the illegal immigrants squats, from Za’atari to Brussels, from Ceuta to Calais, between hope and disillusion, between dream and reality, heartrending stories about encounters on the migratory routes that show a tragic reality.

Winners of the Sophot prize 2019
Scroll to top