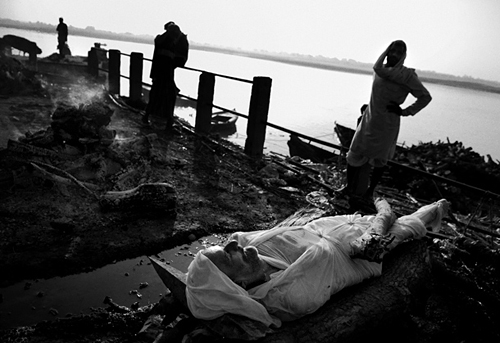 I just arrived in Varanasi (Benares). I immediately realize that this place has an inexplicable power which at first I feel it through peoples eyes. It looks like a judging procedure, which will permit me and my camera to enter into their world. This power seems to have the force to uplift me but on the same moment to vanish me as well. If there is a place in the world that simultaneously makes all senses be occupied, that is Varanasi. The deep smells of burning flesh during cremations, of the excrements of humans and animals and those coming out from the preparation of food in the middle of the street, the bizarre colors and the first known social motives, the persistent sounds of the ritual procedures, and the tendency of the people tο touch me, all these compose a summing up of my own existence. This crazy dance of the four senses completely occupies me. Life and death are so close here as never before. Varanasi has no program, has no comprehensible daily routine and no schedule, whatever happens at 12:00 a.m., happens at 12:00 p.m. Marc Twain’s saying “Benares is older than history, older than tradition, older even than legend and looks twice as old as all of them put together” composes reality, walking in the narrow streets I feel like a time traveller. When I enter the temples, I practically enter the houses of the people of Varanasi. Here there are no blocks of flats or houses, but the existence of an “Atlantis in the land” which emerges from the holy river Ganges, with its residents and its daily life, swinging between the past and the present. Ganges is everywhere. Not only in the brass pots which are used to carry water for several purposes, but also in people’s eyes and souls. It is definitely the beginning and the end of everything. Walking amongst dead people and funeral processions, next to children that seem having fun with everything and monkeys that jump from everywhere, I suddenly realize that I stand in a paranoid theatrical setting and the “protagonists”, as time passes by, succeed to convince me that probably this is the most rational place in the world. Yes, this is what it is, Varanasi is paranoid logic and at the same time logically paranoid. It seems to be a unique contrast which makes me feel that I definitely want to be a part of it. Even if at the end it could make me vanish.
Pays : Inde
Lieu : Varanasi