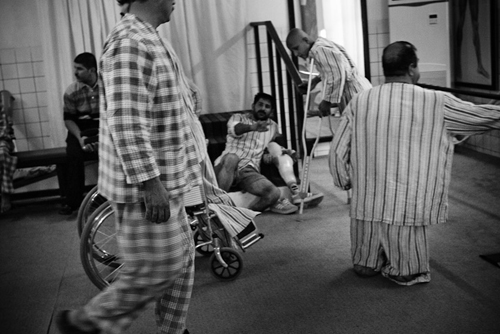 “The war continues for us, our enemy left behind a different enemy when he left our territory. First he enemy was Iraq and later Iran. And the enemy they left behind were landmines, millions of mines…”
Mayor of Chwarta, North Iraq – Over 10 years of war left Iraqi Kurdistan as one of the most contaminated area in the world. Thousands of land mines and unexploded bombs left thousands civilians killed and even more physically disabled. Since 1995 Emergency has treated over 330.000 people with its network of 22 First Aid Posts throughout the country to guarantee fast treatment of patients. In April 2005, with the program fully autonomous, Emergency completed the handover to local authorities of all the Surgical Centers and First Aid Posts, which are now integrated in Iraq’s national health system. Nowadays it focuses on the Rehabilitation-Social Reintegration Center for amputees, the only one in Iraq, which provides prostheses, rehabilitation, vocational training compatible with their disabilities and assistance in setting up professional cooperative workshops in their villages. Emergency pays the first six months of rent and buys the necessary equipment and raw materials in order to set the amputee on the road to independence. I wanted to go. I wanted to witness this “miracle” of reborning after death…because that’s exactly how these people felt after the injury…dead. Because this is a society where making a living (and therefore a family) is based on physical work. Being amputee could mean the impossibility to even create a family, finding a husband…and this could be psychologically devastating. They smile, they work hard, they don’t complain about their physical situation… they are not ashame. They know this is the chance for a second life. I think partly it’s because of all what they went through in these decades…but their acceptance of suffering and death is astonishing. It is part of their everyday life. I met with former patients and feel their dignity, pride and admired their love for life, no matter how simple it is.
Soutien : Emergency Rehabilitation Center - Iraq
Pays : Iraq
Lieu : Sulemanya