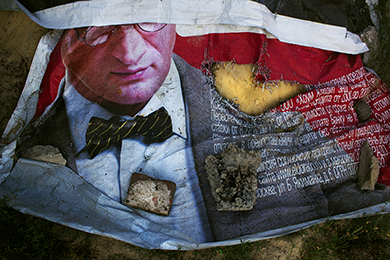 …I just cannot feel like a natural part of the life that is around me. For me the world around me is one whole substance which I have to contact and oppose myself against being forced by some impersonal will. I cannot and do not want to see myself as a part of reality with all its horrors which are impossible to be accepted and should never be. Have you read «The Brothers Karamazov»? I absolutely sympathize with Ivan’s distress about the famous «child’s tear»… That is why I cannot treat another person as just a person who, as much as I do, has only his consciousness, looks at everything from inside, from one point. Thinking in a rational manner, I understand that this is a person, who has come into one’s own as much as I have, but I cannot recognize or feel that. For me this person is a part of reality surrounding me, which is not for me, the power not coordinated with me…. … I was walking and kept thinking about those same ideas, and among other thoughts there was this one: «Trying to believe that me and the human being in front of me have something in common is as unthinkable as trying to find something in common between me and that concrete under my feet or that icy stone». And soon after, while I was in the subway, I read these lines: «What’s in common between you and those fully settled, talkative, sharp-eyed creatures, as much in common as between you and, say, a pen in your hand? Can it be the fact that you are of their breed?» When you notice that someone is dragging the same kind of burden on their shoulders, it feels like its weight starts to fall on two pairs of shoulders thus becoming two times lighter… «Red. In terms of psychology red can imply a vital question, an acute problem, emotional tension or danger. Red routes one’s attention to the external world, it induces excitement, agitation, worry, it increases anxiety level.
Pays : Géorgie, Russie
Lieu : Voronezh