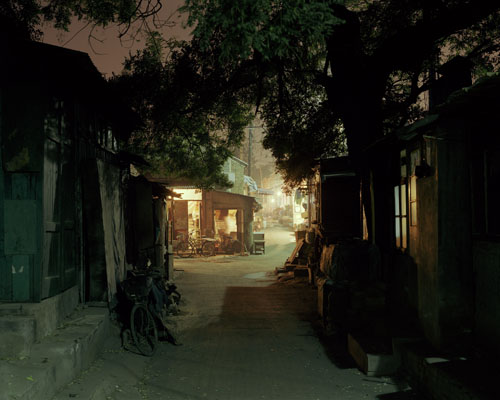 Over half a century after the introduction of a communist model, the leaders of China have laid the fundations of a new super power. By changing from a state controlled economy, from a rural economy to an urban industrial economy, and finally from a policy of economic self-sufficiency to one of opening up to the world, China has become the El Dorado of the multinationals. This new era has imposed the construction of a new setting. In Beijing, in less than 10 years, the equivalent of inner Paris have been demolished and rebuilt. Promoted to capital of the Empire in 1267 by the Mongolian Yuan dynasty, no other historic capital has been remodelled in this way, at such a scale or at such speed. Hardly 30 years ago Beijing was still a vast village constructed at ground level and carved up according to a grid pattern. The narrow alleys of ancient Beijing called « hutongs », lined by traditional collective houses (« Si he yuan ») and built around square courtyards, have been destroyed to make way for large blocks of flats and wide boulevards. From the moment the sign « chai », meaning « destroy », has been placed on a house, the inhabitants generally have about two weeks to organise the move. People who have had a compulsory purchase order placed on their house must also leave the city centre, an environment deemed unhealthy, for the distant suburbs. The building sites are active day and night, the preparations for the 2008 Olympic games being the pretext for the brutal acceleration of these works. The Chinese capital is demolishing its historic heart to build groups of monumentally tall buildings. It is the model of the American city that dominates, with its office blocks, residential complexes and shopping centres. Beijing, which has become a political pawn, will now present an unexpected image – the image of a modern capital of 15 millions inhabitants, invaded by the automobile, encircled by several ring roads and about 30 new towns.
Pays : Chine
Lieu : Beijing