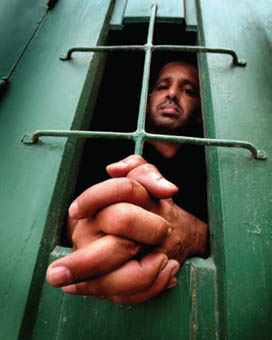 “Defending Life with Life is more than just an exhibition. It is a powerful testimony to the courage and commitment of human rights defenders who every day put their lives on the line in defence of the rights of others.”

Defending Life with Life consists of a series of photographic portraits documenting the experiences of human rights defenders in Honduras, Western Sahara, North East India (in the states of Assam and Tripura), Serbia and Kenya.

Mark Condren’s images document, among others: activist Bertha Oliva from Honduras, increasingly at risk due to post-election violence; Padre Andres Tamayo, deprived of his parish in Honduras, his Honduran citizenship revoked; and Aminatou Haidar who, on 18 December was finally allowed by the Moroccan authorities to return to Western Sahara after 32 days on hunger strike. Haidar had been in the United States to receive a major humanitarian award.