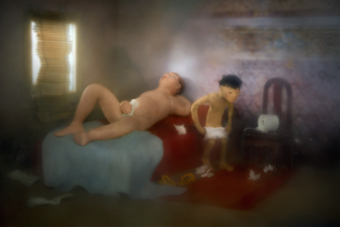 The idea for the project “alles wird gut” (everything’s gonna be fine) popped up on a flight back from Thailand and Cambodia, where I took pictures for the Swedish magazine Elle on UNICEF helping HIV-infected children. Although the subject of my feature was something good, something positive, I felt sick. Angry. Very angry. It was the pictures I did NOT take that haunted me. Pictures of thousands of abandoned, mistreated street-children, selling their skinny bodies to whoever would pay for a bowl of rice. And here I was, squeezed in with all those temporarily satisfied pedophiles on an airplane back to their “normal” lives (my sincere apologies to the few good guys who HAD to travel to Bangkok for whatever normal reason). It was so obvious. But I couldn’t do anything about it, could I? Just close my eyes and pretend I had not seen their contented faces, pretend that they weren’t there, that all of that was not true. But behind my closed eyelids I saw worse. I saw those men touching little boys, I saw them naked on filthy hotel beds asking bravely smiling teenage girls to “be nice to them”, I saw it HAPPEN. Every rape they perpetrated. Every childhood they destroyed. Other images came to me, images that I had kept at a distance. Parents beating up their children, letting them starve to death, every single story I had read in the papers, heard on the news. Cruel pictures, especially for a photographer who seeks beauty in every single frame. Then I had the vision of a dollhouse. My daughter’s perfect little Victorian world. Built by romantic adults who want to make children believe that there is no dark side to life. So tiny. So innocent. Like a soothing whisper in the ear of a crying child: alles wird gut. The first impulse was to use my daughter’s doll’s house for depicting scenes of sexual abuse and violence against children – the not-so-perfect world behind closed doors. But very soon it appeared that I needed to be involved in a more direct, physical way, so I started building little boxes like film sets with detailed interiors and light design. I molded the characters in plastiline, a malleable material, and placed them in dramatic situations as if these were scenes from a film. Creating these little figurines can take several days. During that time, while my fingers smoothed their cheeks and bellies, I got very close to the characters and almost felt what they felt: the victim’s pain on the one hand, the sexual excitement of the pedophile on the other. A very scary experience, I can tell you. None of my settings shows the immediate situation of sexual abuse or violence. It would have been too much of a peepshow. Instead I chose to suggest what had happened through the crime scene – almost as a forensic photographer documents the evidence of what has happened. Or what is about to happen. With the project “alles wird gut”, I try to pose the deeper question of what we see and how we choose to look: where do we start censuring our own perceptions? Do tears wash away our true involvement in an unbearable reality? I want to disturb, provoke reactions, indignation and debate. Displaying these dollhouse scenes and photographs in galleries is not enough. So I am also posting them on city walls wherever I travel, as a kind of “guerrilla art marketing”. And I do get reactions. Sometimes very strong reactions. Often the posters are torn down within the day. Or they are tagged with insults. Good!   Phoenix Art Center is the private museum of the famous german collector of contempory art, Harald Falckenberg.
Photographies Katrin Jakobsen