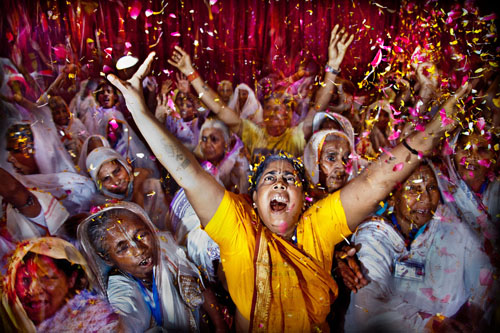 VRINDAVAN, INDIA – MARCH 24: Mostly widows, women celebrate Holi, the Hindu festival of colours in Meera Sehbhagini Mahila Ashray Sadan in Vrindavan in the northern Indian state of Uttar Pradesh, on March 24, 2013 in Mathura, India. They shout ‘Holi Hai’- It’s Holi- in festive ecstasy. Holi was played by the elderly single women recently at a scale never seen before. Played with flowers followed by dry colours, the event was organized by a non-government social organization Sulabh International that has taken up countrywide welfare initiatives for the cause of widows. Vrindavan widows were joined by uplifted scavenger women in blue. Sulabh is originally known for uplift of socially despised scavengers by saving them from age-old practice of physically transporting human waste. Traditionally, widows in conservative regions of the country avoid or have been denied social sanction for remarriage, are expected to wear white, eat simple food and abstain from participating in social events. Historically, they generally faced contempt from the families of their in-laws and community at large, who would attribute their men’s death to themselves, believed to have brought bad luck to the families. They led, and in several places in the country still lead a lonely life. Often women cover their heads and faces as a mark of dignity. A widows’ ashram in the ‘city of devout widows’, believed to be birthplace of Lord Krishna, as Vrindavan is known as, and the activities like celebration of festivals offer an apt platform for camaraderie and socialising, thus giving widows a sense of belonging among the fellow inmates.
Pays : Inde
Lieu : Vrindavan