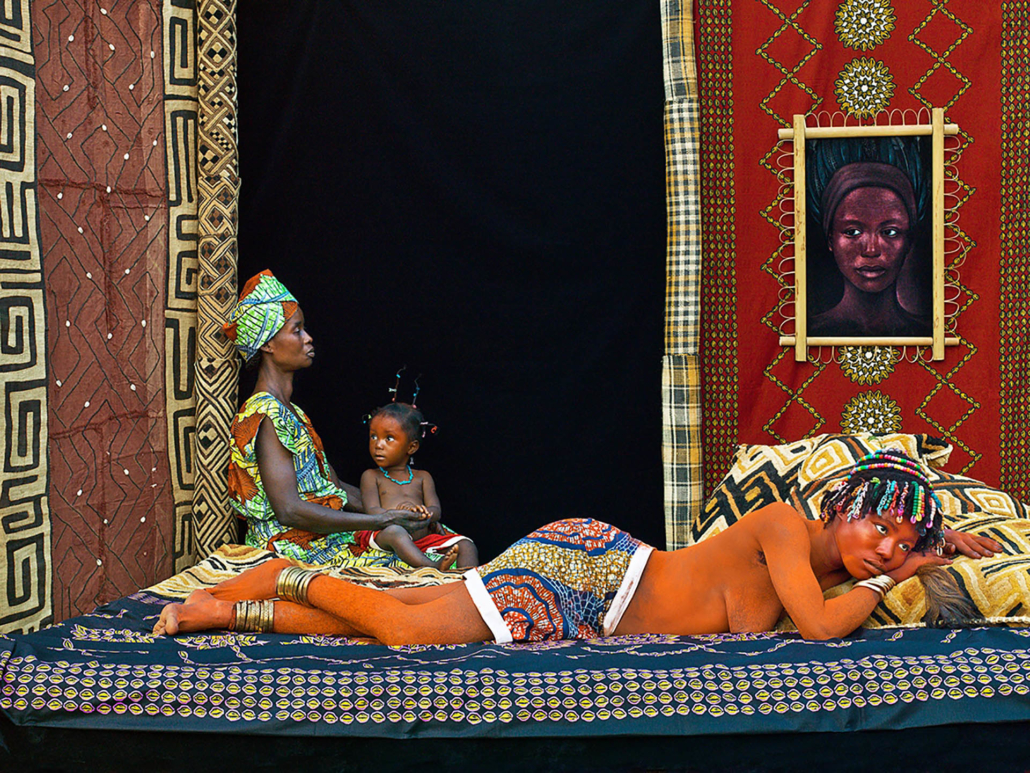 Patrick Willocq presents, in the hangar, photos of his community artistic project “Songs of the Walés”, some of which are unprecedented in Belgium. The project is the result of a unique collaboration with young Pygmy women, their clans, an ethnomusicologist and many craftsmen of the forest (hunters, farmers, fishermen) who became creators during the project. Assisted by Dido Lusamba Ntambwe, an artist based in Kinshasa, Patrick Willocq builds his installations in the middle of the jungle, with the means at hand, without photomontage or collage. He is looking for the best way to tell a story dear to young mothers, turned into actors, by asking them for their participation, by listening to them, by creating a setting, by staging their life and their desires, by carrying out with them castings. The decor, the colors, the characters, everything is thought out, nothing is caught in the dark. This is the photographic result of these grandiose scenes which will enrich this spring the walls of the front space hangar.

In the equatorial forest of Congo (DRC), certain Batwas Pygmy women among Ekondas, first-time mothers, live in seclusion with their children in the midst of other women who are responsible for their well-being. They are called Walés, which means ‘nursing mothers’. The ritual is highly competitive, so a Walé takes on a nickname to differentiate herself from rivals. Every day the young woman engages in an elaborate beautification ritual to draw attention to herself and flaunt their uniqueness. By virtue of the considerations she receives and the sexual ban she abides by, she gains a status akin to that of a dignitary and is honored by the spirits. During the time of their reclusion, they must also create a performance of dances and songs for the big day: their liberation. The songs performed are specific to each Walé. For several years now, Patrick Willocq has been collaborating with these young mothers, actresses who are fully involved in his process, and thus attempt to pierce the mysteries of this tremendously symbolic initiatory rite.

Self-taught French photographer, Patrick Willocq devotes himself fully to photography following a return trip to the Congo in 2009 (where he grew up). His works have been nominated, even finalists or winners of prestigious international prizes including the Discovery Price of the Rencontres d’Arles 2014, Prix Coup de Coeur HSBC and Sony WPA 2016, Price Leica OBA 2014 and 2017. They have been exhibited at numerous fairs contemporary art and multiple museums. His project was also the subject of a major exhibition at the Musée de la Photographie de Charleroi, in 2019. He is co-author with director Florent de La Tullaye of the 52-minute documentary film “Le Chant des Walés” broadcast on the France 5 television channel.

EMERGENCY / THE REVOLT OF THE INDIGENOUS AMAZON POPULATIONS / DARK HORIZONS