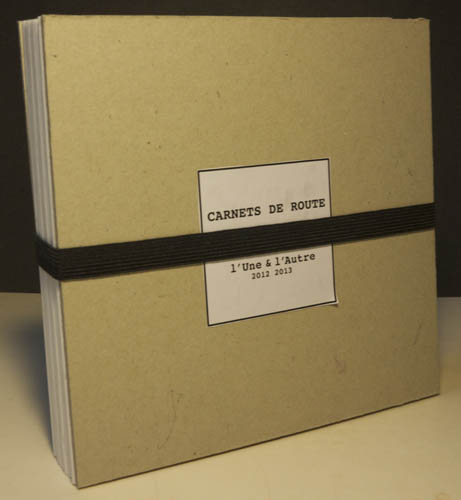 On March 8, 2013, the exhibition « L’une et l’autre » presented the first works of the participants in the photographic workshops organised by 100 Voix !, working with organisations linked to the Aurore association.
Two years later, on the occasion of the publication of a limited run of 500 copies of the first twelve issues of the collection Carnets de Route, the Centre Culturel Valery-Larbaud show the works of the photographers as well as certain photos from the dozen Carnets currently being prepared.
Run by Sarah Moon and José Chidlovsky, these workshops are open to the victims of social ostracism who are taken in by the Aurore association.
One by one, these women, to whom life has not been kind, win back their identities as they relate their stories, the truth of which cannot be doubted when looking at their photos.
Eugene Smith says « sometimes photography is a little voice ». The voice of these women is worth listening to.Photographs by
Bahia Aidli, Lyliie Berry, Aziza, Pénélope Bertrini, Caroline Chartrou, Florence Courtois, Rachida Essaydi, Magali Faucheux, Stéphanie Foucher, Kasia Grabowska, Salha Hamrouni, Huguette Jeanmichel, Sylvana Jegoux, Jocelyne, Blandine Lesur, Lydie, Nana N’Domatezo, Ioan Zlata, Bénédicte Ngobelle, Nelly Royer, Marie Rudnitska, Nadège Soumaré, Gabie Trancéa. 100 Voix ! is an association founded in January 2012 on the initiative of the association Aurore.
Its aim is to allow people on the fringe of society, cared for by Aurore, to rebuild themselves and to regain possession of their own identities by relating their experience by visual means, whether photographic or video. Catering to those within Aurore, Cent Voix ! is dedicated to men and women living on the edge of society, whether it be due to psychological problems, poor health or poverty. 100 Voix ! : precarity and exclusion related by those at the centre of the problem.
Reconstruction and repossession of one’s self image is essential when it comes to helping society’s outcasts to regain confidence and to find their place in society once again. For this reason, Cent Voix ! brings photography and video workshops, run by professionals, to those living on the edge of society.

photographs by Women in the workshop 100 Voix !