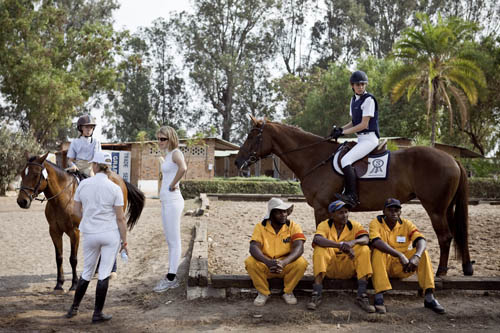 The “copper belt” in Katanga, in the extreme southeast of the Democratic Republic of Congo, holds 10% of the world’s reserves of copper and 34% of cobalt. At the beginning of 2011, the market price for copper hit a new high : 10.000 dollars per ton on the London Metal Exchange. The trend has continued since then, with the current price at above 8.000 dollars per ton. Huge fortunes have been made on the back of this unprecedented boom, helped by the liberalisation organised by the World Bank at the start of the ‘00s and a particularly opaque management of funds coming from the mining sector. Up to now, only a few multinationals and a handful of individuals linked to the government had the means to take advantage of the situation. Ironically. the conditions are actually worse for the 200 000 Katangese « diggers » who survive thanks to this industry and who make up the majority of the labour force. Investors from Western, Indian or Chinese multinationals have chased them off the most lucrative sites. Forced to sell their production at a low price to Government partners, or driven into recycling industrial waste, their life expectancy drops as quickly as their revenue. Two years’ work on this subject and many trips to the region have allowed me to become familiar with the various actors involved in the mining activities in Katanga. Little by little I managed to get access to the mining, storage and transformation sites belonging to the multinationals. I was accepted into the community of the new businessmen which allowed me to record their private lives (parties, weekends….). The aim of this project is to bring about a better understanding of the world of business and mining in Katanga, where local needs seem to be ignored. It is also an illustration of the combined effect of the recent liberalisation of the world’s economy and the rush for raw materials in Africa, highlighting along the way the refusal of international companies to share their profits. This is not the story of ore covered in blood, the result of armed conflict, with images of Kalashnikov-toting rebels, upon which most international studies tend to focus. Instead, it is a harder story to tell, that of the huge gulf between a local population working to extract raw materials for foreign companies, and the traders in London or in New York, betting on a profit made possible thanks to an underpaid and overexploited workforce.
photographs by GWENN DUBOURTHOUMIEU