THE FORGOTTEN CHILDREN IN AN AHMEDABAD SLUM 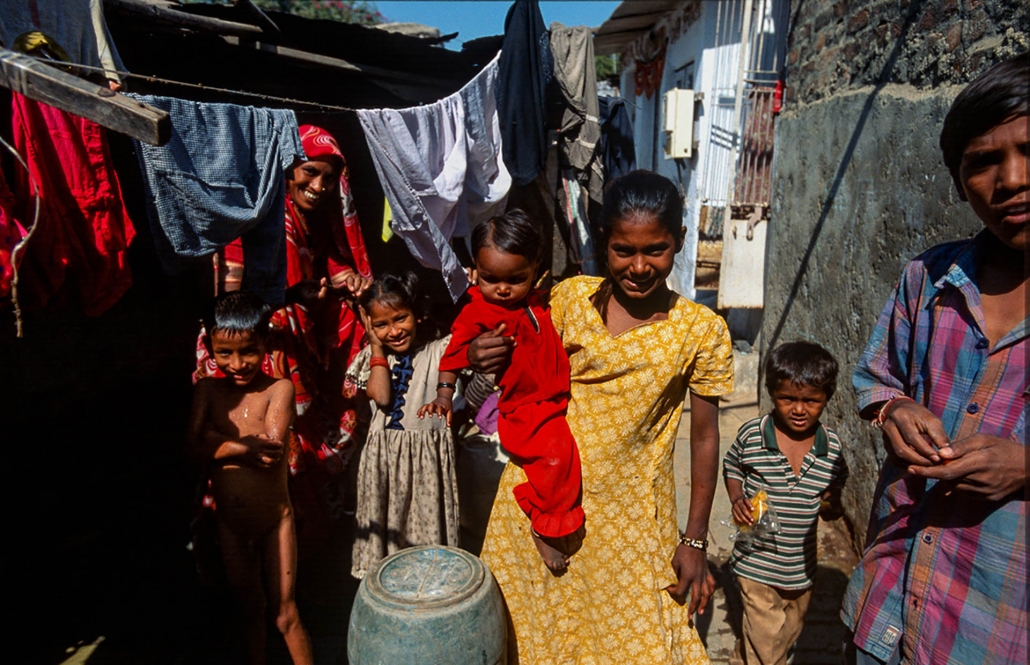 In Amdabad, I ventured to find the portal of a place made famous as the epicenter of non-violence, of Gandhi.

In the large patio of the Sabarmati Ashram, I walked into what was Gandhi’s home on the property for nearly thirteen years searching for ethereal knowledge. That’s when I met Dr. A.T. Ariyaratne, founder of Sarvodaya – a Gandhi-like organization representing the rural poor in his native Sri Lanka, and a former Nobel Prize nominee – in the hallway of the scantily furnished home where Gandhi lived. Dr. Ariyaratne too had come here looking for knowledge. And we both found it; in the most peculiar of places behind a thin-glass wall encasement where the empty urn once carrying Gandhi’s funeral ashes, his asymmetric walking stick, his frail wire-frame reading glasses, sat silently on display. Gandhi was a simple man. His affinity and compassion for the poor and the oppressed (the untouchable Dalits) were catching. No more words were needed for us. We simply understood.

Ahmedabad is the capital of the Indian state of Gujarat and India’s seventh largest city. The Sabarmati Ashram compound – clean, uncluttered, contemplative – represented for Gandhi and for us all that was ideal and decent about the Indian masses and about humanity.

A couple of miles away from the Ashram, in a tiny obscure enclave slum tucked away behind scattered vegetable and soda stands, the sound of children frolicking caught my attention. Down a small hill on the west bank of a parched and filthy tributary to the Sabarmati River, a tiny one-room open-facade classroom nestled among tin-roofed wooden shacks where children gathered for school.

I walked in to be greeted by the tiny young faces beaming at me from the floor where they sat learning their ABCs in English. While these children attended school most slum children spent their days cooking and caring for younger siblings while parents scraped for food or work on the streets.

Mirnuxi Dhairew, one of two instructors from the Kasturben Himmatlal Jani Charitable Trust, invites me to meet the children. I find that some of them are shy and withdrawn.

”They have been abused,” says Dhairew, ”adults here take advantage of them when parents aren’t around!”

I could see it on their faces – the stories of distrust and fear of adults. The older kids try to exhibit certain happiness or conformity to what occurs when no one’s around. That’s when Dhairew gathers all of their attention toward the front instructing them to sing the ”ABC Song.”

Here lives the spirit of Gandhi imbued on a nation, amongst the children of the forgotten. There was the forced, harsh reality of life for the young in the slum, for these children cared for now by Kahija – charitable foundation that provides education and medical care to street children.

”Neighbors rape them,” said Sushri Sonal Kellogg, a crime reporter for The Asian Age in Amdabad. Kellogg holds little hope for slum children or their families. ”Nobody seems to care too much about what’s going on there,” she says, ”everybody is struggling. The need is too great.”

As beggars on the streets, trash sorters at impromptu dumpsites, or, if they’re lucky, as factory workers at the nearby paper mill, slum parents have no choice but to leave their children behind unattended. Neighbors might step in unprompted to lend a hand, but that generosity is highly sporadic at best. So, the abuse continues in these prevalent slums – a phenomenon I saw repeated in slums from Mumbai all the way to Calcutta.

I saw it happen regularly in the slum I grew up in forced, rules-less sexual experimentation gratifying for some, disastrously emotionally damaging for others especially the little victims. In our home, Papá spent much of his time working in sugar cane fields, or far away in New England. Mamá was left behind alone to care for all of us for months at a time – carrying water on her head from the nearby river or washing clothes against worn-out rocks. These are the hours when in slums bad things happen to children. These were the hours when life changes for the little victims.

My hope is to continue to capture heartening stories through my lens; to record, if just for one moment, the life and spirit of these incredible people around the world.

Manuel Rivera-Ortiz’s work centers on people in developing countries. ”My childhood experiences color what I want to talk about in pictures,” he says. ”The children in the slum, are all very similar to my life growing up in so many ways, so they draw me in.”